Are Your Ears Ringing?

Years before they reach retirement age, senior citizens often begin thinking about the “golden years.” And, while they ponder heart disease, hypertension, arthritis and problems with their eyes, one particular disease often escapes their attention: tinnitus.

Tinnitus comes from the Latin word meaning "to ring or tinkle.” It’s a collection of symptoms of the inner ear, that’s often referred to as “ringing in the ears.” While ringing is the most frequently described sound, it can also appear in the form of swooshing, clicking, buzzing or hissing. Some people refer to the sound as music.

According to the Center for Disease Control , tinnitus affects more than 50 million people a year. For most, it’s usually an inconvenient, benign problem. But the physical impact of the disease can cost sufferers more than $30,000 a year in lost wages and health expenses. It costs American society more than $26 billion, annually. According to studies conducted by the United States Veterans Administration, over 970,000 veterans (one of the highest risk groups for contracting tinnitus) received treatment during 2012, at a cost of more than $1.5 billion.

There are two common types of tinnitus: subjective and objective. In subjective tinnitus , sounds are heard only by the patient. These represent more than 99% of tinnitus cases. Objective tinnitus sufferers hear noises that are audible to other people, as well as themselves, and usually represent sounds like the hissing of blood flow and the movement of muscles.

In nearly every case, tinnitus sufferers complain of subjective sounds – sounds only they can hear. They complain of:

The American Tinnitus Association has compiled a number of sample tinnitus sounds that may help your healthcare provider diagnose your type of tinnitus. Click on the description below to hear each of the sounds. Remember to turn your volume up:

When most people are presented with a diagnosis of tinnitus, they immediately ask, “How did I get it?” or “What did I do wrong?”

Tinnitus is not a disease in and of itself. Rather, it represents a series of symptoms representative of nearly 200 underlying health conditions. The most frequent cause is hearing loss. 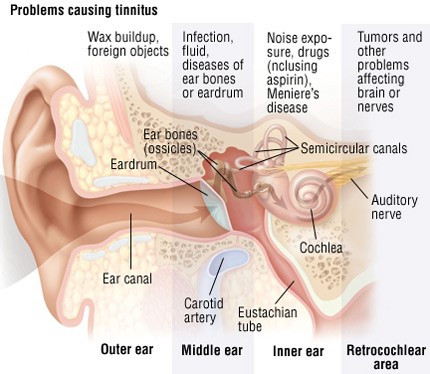 Although tinnitus can afflict anyone, at any age, the most common cause of hearing loss is the aging process, usually beginning around age 60. In addition to the aging process, many people have spent their lives engulfed in high-decibel noise - loud machinery, music, sporting events and concerts. Other causes of hearing loss include ear wax accumulation (ceruminosis), dirt or foreign objects in the ear canal, loose hair in the ear canal and head congestion. It can also be caused by:

If your healthcare provider or audiologist suspects you have tinnitus, they may suggest a number of tests to confirm their diagnosis. Common tests include:

Administering tests may also include a series of mental examinations to estimate how much the patient’s tinnitus is likely to impact their quality of life.

Unlike cancer or heart disease that may significantly impact loved ones or co-workers, tinnitus patients are usually relegated to suffer with their disease in silence. Millions manage some way of living with tinnitus. However, more than two million suffer with extreme or debilitating symptoms that include:

In 2014, the American Tinnitus Association surveyed 1100 of its members to determine how the disease impacted their lives. They asked, “What best describes how tinnitus affects your day-to-day life? The results are summarized in the chart below: 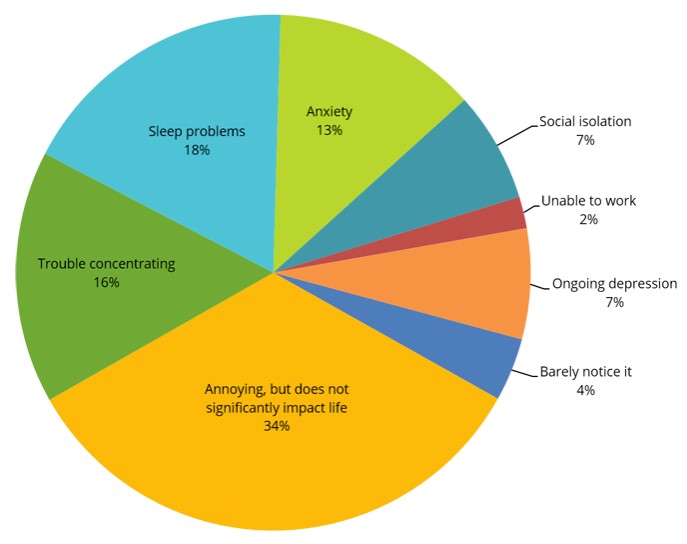 While there are currently no cures for tinnitus, there are a number of effective ways to manage the condition, helping the afflicted to live fuller, more production lives. They come in the following forms:

While there is little evidence that diet directly impacts an individual’s tinnitus, it can help to manage body weight, and hypertension, improving blood flow energy levels and an overall feeling of well-being. There is also a strong correlation to Ménière’s Disease and sodium in the diet.

Many sufferers of tinnitus are prone to isolation – largely because they feel they cannot fully enjoy activities with sound – movies, intimate conversations and watching television with other people. Looking for ways they can participate more in group settings can help minimize their symptoms and adopt an overall positive outlook on life.

Outdoor activities – particularly those performed in groups – helps to mask the internal sounds of tinnitus. Just the sound of air passing by their ears while skiing helps tinnitus sufferers to forget about their symptoms for a while.

In addition to diet, many of the previously mentioned therapies can improve the sufferer’s self-esteem and reduce stress.

Biofeedback has been shown to be effective in helping tinnitus sufferers temporarily block out their symptoms – usually by working to control heart rate, skin temperature, and muscle tension.

Like biofeedback training, hypnotherapy has been shown to effectively reduce the symptoms of tinnitus by promoting relaxation and reducing anxiety.

If symptoms of tinnitus include being exposed to loud noises, it makes sense to wear high quality hearing protection when engaging in noisy activities to reduce risk of further injury. Ear plugs, canal caps, and ear muffs can significantly reduce your risk for continued damage by blocking high levels of external, ambient noise.

While currently, there are no FDA approved drugs to cure tinnitus, there are a number of prescription and over the counter drugs that have been effective in managing symptoms. They include the following:

There are also 5 techniques tinnitus sufferers can try with the help of a licensed therapist. They include:

The Future of Tinnitus

While successful cures for tinnitus may be years away, there are a number of exciting experimental therapies being conducted all over the world. These include:

Repetitive Transcranial Magnetic Stimulation uses a powerful magnetic coil to deliver a series of electromagnetic pulses to the brain. It’s thought that the pulses help to reduce the perception of tinnitus.

During Transcranial Direct Current Stimulation (tDCS), patients wear scalp electrodes to transmit electromagnetic impulses to the brain. Some studies have demonstrated over 40% improvement in patients with tinnitus.

Deep Brain Stimulation (DBS) has been successfully used in Parkinson’s disease patients to minimize tremors. Unlike rTMS and tDCS, DBS is an invasive procedure require surgery.

Vagus Nerve Stimulation (VNS) involves implanting electrodes to the vagus nerve – the nerve that provides electrical input to the brain, heart and digestive system. It is currently being used in the treatment of epilepsy and depression.

If you or someone you know is suffering from tinnitus, take heart. There are dozens of possible solutions to help reduce the symptoms. To get started, check with your doctor or make an appointment with a licensed audiologist.